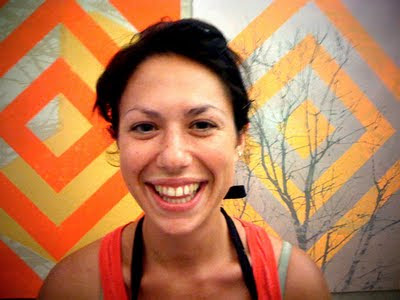 A familiar smiling face in the screenprint studio is Annie Albagli. She has been working long hours in preparation for her upcoming show "Greetings from Paradise". We caught up with Annie to talk about screenprinting, paradise and the Pyramids.
SS: Tell us about your background, how you came to DC, and found Pyramid.
AA: I am a traditionally trained painter and sculptor, and studied at Boston University. During my time at BU I had the privilege of studying at the Scuola Internazionale Di Grafica in Venice, Italy—where I studied Itaglio and bookmaking. I moved back to DC after living in Dallas, Texas for close to a year, where myself and a colleague started a residency and gallery. My family lives close to DC so I thought it would be nice to be a little closer to home. I found Pyramid Atlantic through a friend of mine, Lindsay McCulloch—who knew I was searching for an artistic community. I am really lucky she pushed me to check it out!

SS: What draws you to the screenprinting process, over other print media?
AA: I am drawn to many aspects of screenprint. I like the process—how the image changes from what you start with to how it exposes on the screen. I like trying to push the process and create space in my prints—which contradict the flatness inherit in screenprinting. I like the idea that the images on your screen are at your disposal —and I often find myself layering the same screens over and over and over again to create my image. The fact that once I have arrived at the right imagery on my screen I can layer those images with such an immediacy is very rewarding.

SS: Your upcoming solo show is about exploring the creation and invention of Paradise. It is exciting to see the pieces being created in the studio. How do you overcome the challenges of working large?
AA: When working large—especially in a communal space, I try and break down the work into smaller pieces. Especially in screenprint you are limited to certain dimensions—the dimension of the screen, the exposure unit, the table etc. I have done my fair share of joining tables together, when no one else is working. But a lot of the process comes out of having to think like you are creating a puzzle—how can you maximize the space you have to work with, how can you fit multiple screens together to form your image, etc. Most recently I created a 54” x 44” screenprint and the only way I could achieve this was using five different screens and a very elaborate set up.

SS: Do you embrace "mistakes" in your work, or are you a perfectionist?
AA: Oh boy do I embrace “mistakes!” These serendipitous events help me understand another way I can create something, or other times how to improve my process—but once I have gone through a process and learned from it I become very obsessive over doing it correctly and methodically.

SS: People are always curious about success stories in the studio. Do you have any tips for those working at Pyramid?
AA: Yes! Watch the artists around you—learn from their process. One of the things I love about Pyramid is that there are always fresh faces around you and this means there are so many opportunities to learn something new about the way to approach the medium. We had one artist from Spain last year working in screenprint. Watching her print, I learned to be much more careful and particular about my process. Then earlier this year, I had the opportunity to see how one of the keyholder residents screenprinted—how she layered her prints, both with intention and to see the serendipitous affects it had on the work. Both of these experiences were equally influential in how I approach my prints now.

SS: Screenprinting is a versatile medium that can be applied to or combined with many surfaces. Your 2010 Eden tree series combined screenprinting, plywood and LED lights. What other screenprint artists do you think are pushing the boundaries of the medium?
AA: I recently saw some screenprints by Robert Rauchenberg and I was intrigued by the medium he printed on and the inks he used. I also had the privilege of assisting Charlie Cohan late last year with a large print installation he was creating for the Raleigh-Durham Airport. He spent a week or so printing on 2200 lbs of glass. That was pretty amazing. 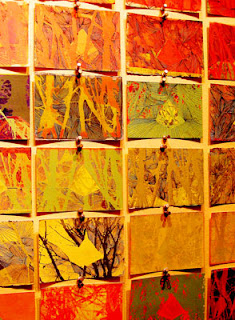 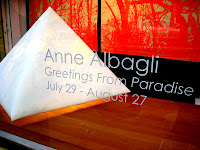 Metro: Shaw / Howard U on the Green Line; Metrobus: 70, 71 ; or capital bikeshare (station across from PPW) Gallery / Shop hours: Friday 2-7pm, Saturday 1-6pm and by appointment
Posted by Marty Ittner at 9:59 PM